Free next day delivery over Ł20 Express checkout with PayPal 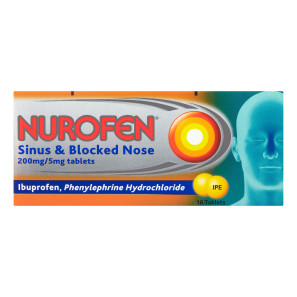 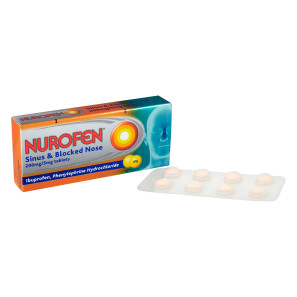 Write a review
Out of stock Email me when back in stock
£5.49
Out of stock
Delivery information
Free delivery over £20 Product #0151351

Please note images are for illustration purposes and may differ from the product(s) you receive.

Nurofen Sinus & Blocked Nose 200mg/5mg Tablets contains ibuprofen and phenylephrine hydrochloride, which are effective in relieving the symptoms associated with colds and flu, including relief of aches and pains, sore throats, headache, nasal congestion (blocked nose) and lowering of temperature.

Ibuprofen belongs to a group of medicines known as non-steroidal anti-inflammatory drugs (NSAIDs) and is effective against aches and pains (including headache), swelling and can also reduce a fever. Phenylephrine hydrochloride (nasal decongestant) reduces swelling in the passages of the nose, relieving nasal congestion and reducing the pressure which may cause a headache.

Tablets must be taken with water and swallowed whole. It is important to drink plenty of fluids when suffering from colds and flu.

Adults, the elderly and children over 12 years: This medicine is for short-term use only. Take the lowest dose for the shortest time necessary. Do not take Nurofen Sinus & Blocked Nose 200mg/5mg Tablets for longer than 10 days. If you do not get better, or get worse, talk to your doctor. They will tell you if it is safe to carry on taking the medicine. Take two tablets up to 3 times a day. Leave at least four hours between doses and do not take more than 6 tablets in any 24hour period.

Do not give to children under 12 years.

If you have taken more Nurofen Sinus & Blocked Nose 200mg/5mg Tablets than you should, or if children have taken this medicine by accident always contact a doctor or nearest hospital to get an opinion of the risk and advice on action to be taken.

The symptoms can include nausea, stomach pain, vomiting (may be blood streaked), headache, tinnitus (ringing in the ears), confusion and shaky eye movement. At high doses, drowsiness, chest pain, palpitations, loss of consciousness, convulsions (mainly in children), weakness and dizziness, blood in urine, cold body feeling, and breathing problems have been reported. If you forgot to take Nurofen Sinus & Blocked Nose

Do not take this medicine if you: • are allergic to ibuprofen, phenylephrine hydrochloride or any other ingredients of this medicine (see section 6) or to aspirin or other painkillers • have ever had a stomach ulcer, perforation or bleeding • have had a worsening of asthma, skin rash, itchy runny nose or facial swelling when previously taking ibuprofen, aspirin or similar medicines • have had gastrointestinal bleeding or perforation when previously taking NSAIDs (Non-Steroidal Anti-Inflammatory Drugs) • are taking other NSAID painkillers • are taking more than 75mg of aspirin a day. If you are on low-dose aspirin (up to 75mg daily) speak to your doctor or pharmacist before you take this medicine • have severe liver or kidney problems • have heart problems, high blood pressure or blood coagulation disorder • have breathing difficulties • have an overactive thyroid • are taking or have taken within the last 14 days a medicine called monoamine oxidase inhibitor (usually used to treat depression) • are in the last 3 months of pregnancy • are under 12 years old. • have an enlarged prostate Warnings and Precautions

Talk to your doctor or pharmacist before taking this product if you: • have or have had asthma • have kidney, heart, liver or bowel problems or are dehydrated • have high cholesterol or previously have had a heart attack or stroke • have an history of gastrointestinal disease (such as ulcerative colitis, Crohn’s disease) • have Systemic Lupus Erythematosus (a condition of the immune system causing joint pain, skin changes or other organ disorders) • are a smoker • are in the first 6 months of pregnancy. • have diabetes • have glaucoma • have a blood vessel disease such as Raynaud's phenomenon Other medicines and Nurofen Sinus & Blocked Nose 200mg/5mg Tablets

To reduce the risk of side effects, do not take this product with other NSAID containing products (e.g. aspirin, ibuprofen). If you are on low-dose aspirin (up to 75mg daily) speak to your doctor or pharmacist before you take this medicine. Nurofen may affect or be affected by some other medicines. For example: Avoid taking this product with corticosteroids tablets, quinnolone antibiotics or medicines that are: • anti-coagulants (i.e. thin blood/prevent clotting e.g. aspirin/acetylsalicylic acid, warfarin, ticlopidine) • to stimulate your heart (e.g. glycosides including digoxin) • to reduce high blood pressure (ACE-inhibitors such as captopril, beta-blockers such as atenolol medicines, angiotensin-II receptor antagonists such as losartan) • to help you passing water (diuretics) • for the temporary suppression of your immune system (e.g. methotrexate, cyclosporine, tacrolimus) • for mania or depression (e.g. lithium, SSRIs or Monoamine Oxidase Inhibitors) • for pregnancy termination (e.g. mifepristone) • for HIV treatment (e.g. zidovudine) • comprised of other sympathomimetic agents such as decongestants (e.g. pseudoephedrine). Some other medicines may also affect or be affected by the treatment of Nurofen. You should therefore always seek the advice of your doctor or pharmacist before you use Nurofen with other medicines.

Other warnings • Anti-inflammatory/pain-killer medicines such as ibuprofen may be associated with a small increased risk of heart attack or stroke, particularly when used at high doses. Do not exceed the recommended dose or duration of treatment. • You should discuss your treatment with your doctor or pharmacist before taking Nurofen if you: - have heart problems including heart failure, angina (chest pain), or if you have had a heart attack, bypass surgery, peripheral artery disease (poor circulation in the legs or feet due to narrow or blocked arteries), or any kind of stroke (including ‘mini-stroke’ or transient ischaemic attack “TIA”). - have high blood pressure, diabetes, high cholesterol, have a family history of heart disease or stroke, or if you are a smoker. Fertility, pregnancy and breast-feeding Nurofen Sinus & Blocked Nose 200mg/5mg Tablets belongs to a group of medicines which may affect fertility in women. Fertility goes back to normal when you stop taking the medicine.

Like all medicines, Nurofen Sinus & Blocked Nose 200mg/5mg Tablets can cause side effects, although not everybody gets them. Side effects may be minimised by taking the lowest dose for the shortest time necessary to relieve the symptoms. You may suffer one of the known side effects of NSAIDs (see below).

If any of the side effects gets serious, or if you notice any side effects not listed in this leaflet, tell your doctor or pharmacist. If you get any of the following at any time during your treatment STOP TAKING the medicine and seek immediate medical help if you develop: • signs of intestinal bleeding such as: bright red faeces (stools/motions), black tarry stools, vomiting blood or dark particles that look like coffee grounds. • signs of serious allergic reaction such as: - difficulties in breathing or unexplained wheezing - dizziness or faster heartbeat - severe forms of skin reactions such as itchiness, skin rash with redness, peeling, flaking or blistering (e.g.: Steven-Johnson syndrome) - swelling of your face, tongue or throat • signs of kidney problems such as: - passing less or more urine - cloudy urine or blood in urine - pain in the back and/or swelling (particularly in the legs) • signs of aseptic meningitis with neck stiffness, headache, feeling sick, being sick, fever or disorientation. Patients with autoimmune disorders (lupus, mixed connective-tissue disease) may be more likely to be affected. • signs of blood disorder resulting in unexplained or unusual bruising or bleeding, fever, sore throat, mouth ulcers, flu-like symptoms and sever exhaustion • signs of liver problems uch as stomach pain, nausea, jaundice (yellowing of the skin and the whites of the eyes) or passing dark brown urine. • a severe skin reaction known as DRESS syndrome can occur. Symptoms of DRESS include: skin rash, fever, swelling of lymph nodes and an increase of eosinophils (a type of white blood cells). STOP TAKING the medicine and tell your doctor if you experience the following uncommon side effects which affect 1 to 10 users in 1,000: • indigestion, heartburn or feeling sick • pains in your stomach (abdomen) or other abnormal stomach problems.

TELL YOUR DOCTOR if you have any of the following side effects, they become worse or you notice any effects not listed: Uncommon side effects which affect 1 to 10 users in 1,000: • allergic reactions, such as skin rashes (urticaria), itching, peeling • headaches Rare side effects which affect 1 to 10 users in 10,000: • flatulence (wind), diarrhoea, constipation and vomiting Very rare side effects which affect less than 1 user in 10,000: • blood disorder resulting in unexplained or unusual bruising or bleeding, fever, sore throat, mouth ulcers, flu-like symptoms and severe exhaustion • drop in blood pressure or irregular heart beat • liver problems Side effects for which the frequency can not be estimated from available data: • worsening of asthma or bronchospasm • swelling (oedema), high blood pressure, heart failure or attack • worsening of colitis and Crohn’s disease • difficulties in passing urine (in men only). Medicines such as Nurofen Sinus & Blocked Nose 200mg/5mg Tablets may be associated with a small increased risk of heart attack (myocardial infarction) or stroke. See section 2 'Other warnings'.

Reporting of side effects If you get any side effects, talk to your doctor, pharmacist or nurse. This includes any possible side effects not listed in this leaflet. You can also report side effects directly via the Yellow Card Scheme at: www.mhra.gov.uk/yellowcard or search for MHRA Yellow Card in the Google Play or Apple App Store. By reporting side affects you can help provide more information on the safety of this medicine.

Sign up to our newsletter and get the latest deals, exclusive offers, health advice from our online doctor and much more.

Explore the brands available on Your Pharmacy